Hit enter to search or ESC to close
Uncategorized

By Phillip SackApril 7, 2019 No Comments

National rail operator, TransNamib and Ascon Energy (Pty) Ltd., an Ascon Group company, signed a Rail Transport Agreement mid March 2019, for the transportation of coal, containers and various commodities between Walvis Bay and the inland terminals of Grootfontein and Gobabis.

The two companies formalized their business cooperation by signing a firm and binding agreement, which was signed by TransNamib CEO, Johny Smith and Nate MacMillan, Ascon Energy’s Managing Director.

The signed agreement will cater for the transportation of more than 600,000 tons per annum of various commodities, other bulk commodities as well as containers. The initial focus will be the imports and exports on the Walvis Bay to Grootfontein route; followed by the Gobabis to Walvis Bay route, utilizing the Trans Kalahari Corridor.

The envisaged commencement of this contract will be within the next quarter and will be used as a stimulus to grow the train service between Grootfontein and Walvis Bay for Congolese and Zambian traffic. TransNamib is also in discussion with other logistics service providers within the region to develop the intermodal facilities at Grootfontein to support the growth of volumes in the short to medium term. 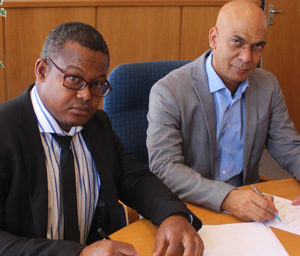